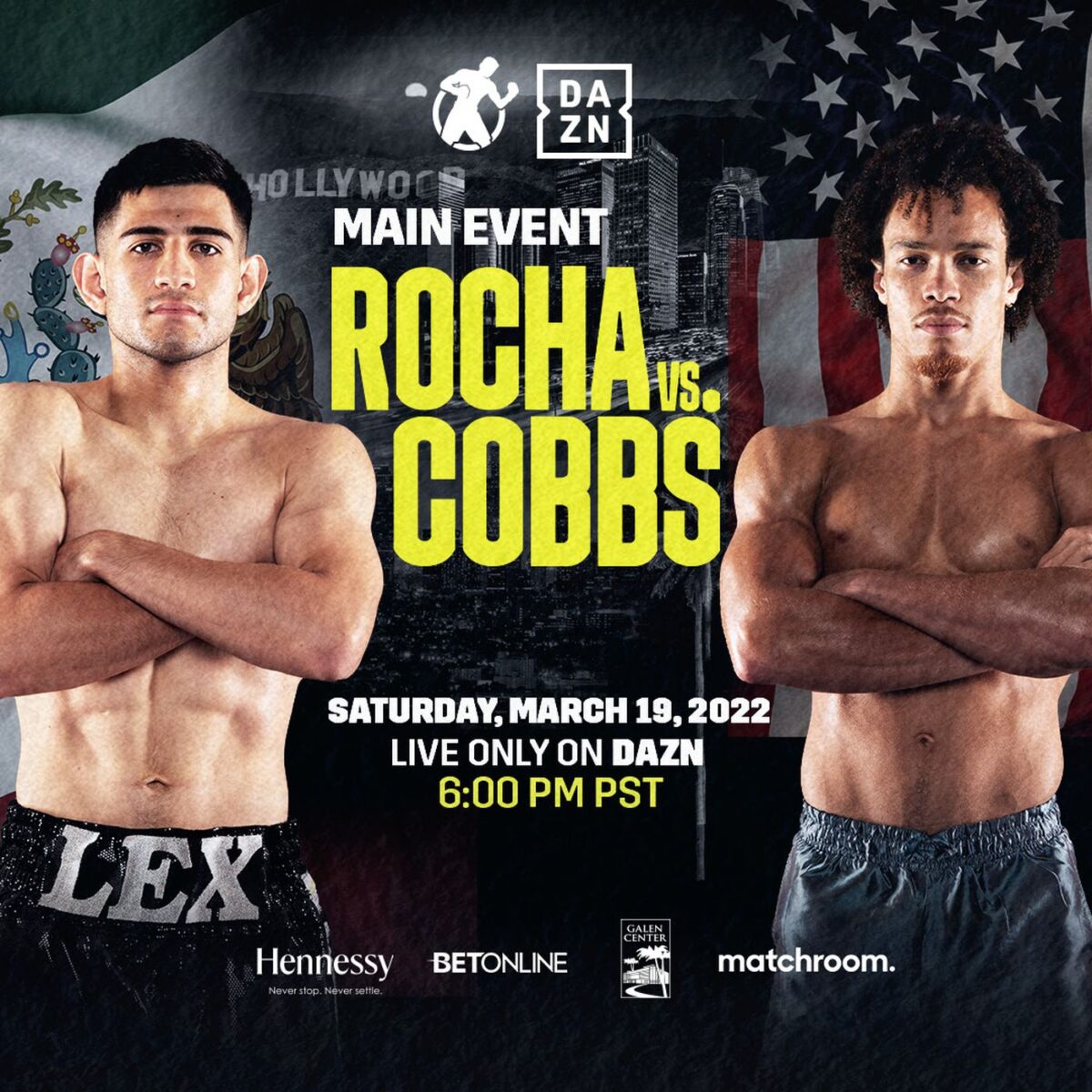 Following the unexpected hospitalization of Vergil Ortiz Jr., a new headline event is set for this Saturday, March 19, 2022 to replace his bout with undefeated UK welterweight Michael McKinson. The co-main event is now the headliner: Blair Cobbs vs Alexis Rocha is set to be a fan-friendly replacement.

Alexis ‘Lex’ Rocha, a promising welterweight contender, from Santa Ana, California, is a technically sound southpaw who has sparred with the likes of Manny Pacquiao and Josh Taylor. Over the past few fights, one can tell that the intricacies of sparring with greats has developed Rocha as a fighter. This leads most fans to favor Rocha against Cobbs’ wild, but dangerous, style, as a poll from Boxing enthusiast @SpicyMami_ shows:

Blair Cobbs is no slouch. Cobbs is trained by the great Freddy Roach and has serious knockout power. However, Cobbs and Rocha share opponents with both receiving victories over them. Cobbs – to his credit – was able to knockout a difficult Brad Solomon whose styling gave Rocha’s more aggressive counter-punching style problems.

Still, given Rocha’s constant activity, we do feel that at some level the momentum is on the side of the comparatively younger fighter. He’s a tough contender that may be underestimated. Rumors abound that this fight has been brewing since November. Rocha alleged that the fight was rejected by the Blair Cobbs camp.

Rocha is a rising prospect whose sole defeat is to a fleet footed boxer stylist in a competitive fight. Since his loss to Rasheed ‘Speedy’ Ellis, Rocha has pushed forward and grabbed some intense knockouts against other top level contenders. A rematch with Ellis should Rocha get past Cobbs is also an interesting fight.

Cobbs throws wild shots at times. He has been dropped in the past. His power is obvious. Cobbs is also quite the talker as can be seen on the video interview from Golden Boy’s promotional materials.

For his part, Rocha is regarded as technically sound. The high-guard defense means that he will not be caught by basic combinations. His only weakness is with boxers that have a lot of lateral movement. Cobbs presents none of this boxing styling. Perhaps, he could get caught with something wild, but then his conditioning is second to none.

In this update, we note the content that is most relevant for the Chicano community. Mexicans should rejoice at Canelos most recent victory. Check out our related websites to see what is up in our Chicano world.

Colloquial Lyrics & News Documents For Mexican Spanish: This content is tailored for practitioners of NLP. 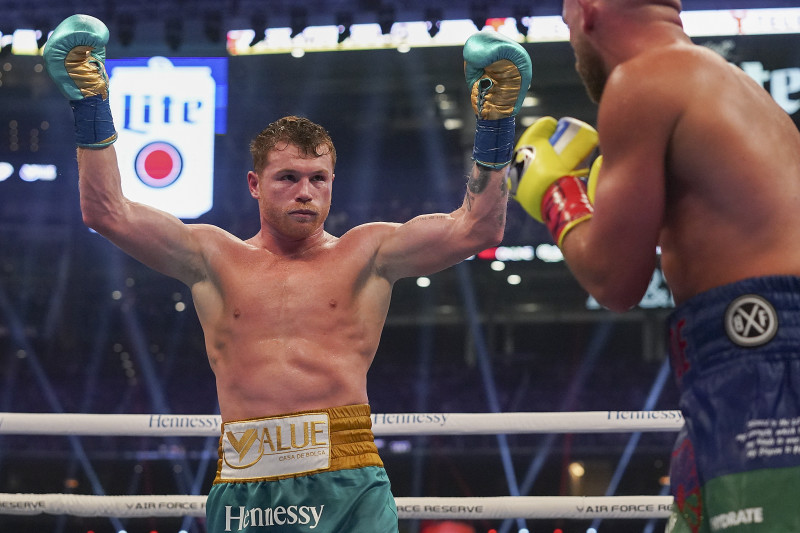 The number one boxer in the world: @Canelo with boxing clinic on how to defeat slick southpaws: you break them.

Boxing’s Pound For Pound number one fighter is still Saul “Canelo” Alvarez whose decisive defeat of Billy Joe Saunders permits him to unify the WBO, WBA and WBC Super Middleweight Belts. The match was heralded as Canelo’s toughest challenge since his 2018 bouts with Gennady Golovkin (Triple-G), but ended in a remarkable stoppage for the Mexican boxer from Guadalajara, Jalisco.

Billy Joe Saunders attempted to make this fight more competitive. Initially, he was able to land shots against Canelo, peppering the face of Canelo and seemingly frustrating Canelo for rounds 2, 6 and 7. However, the ability to get comfortable inside may have been a ploy for Canelo to land that one shot at the head.

Canelo was consistingly connecting with power shots, discarding the jab unless for feinting purposes. The task of slowing Saunders was made easier over the fights progression. Every round had a significant body shot land on Saunders. This slowed him down, possibly enticing him to try his hand at shorter distances with some slick body movement, ducking underneath Canelo’s shots. The mistake he made was to duck repeatedly to the right; this is where he was timed with a brutal uppercut haymaker type shot for the ages:

Mark Tibbs discussed his decision to stop fight after Billy Joe Saunders suffered an eye socket fracture. In a post-fight interview wit Seconds Out, Tibbs noted that at the end of the 8th round, Saunders’ body language was not leading him to believe he could continue the fight. Ultimately, the trainer discussed that it was his decision – not Saunders’ – to stop the fight.

Curiously, the father of Billy Joe Saunders was also beaten by security when he tried to rush the stage upon noticing his son was suffering an injury.

The great Julio Cesar Chaves Sr affirmed once more that Canelo is in his prime. In a message to boxing star via “Little Giant Boxing”, the Mexican legend congratulated Canelo for breaking the biggest US indoor boxing crowd as well as wishing Billy Joe a speedy recovery.

ESPN Deportes, Chava Rodriguez, was also very insightful regarding the aptitude Canelo displayed. He noted that Canelo was able to negate the pressure from Saunders and adapt his strategy. He only scored 2 rounds in favor of Saunders.

During the fight week, unfortunately, Rodriguez was verbally insulted by the Saunders entourage. In a strange way, Canelo was able to impart cosmic justice to rectify the insults from Billy Joe Saunders. Objectively, Rodriguez was able to credit Saunders with his ability to go toe-to-toe against Canelo at times, landing one-two combinations. However, the timing of some of Canelo’s counter-shots was enough to negate Saunders’ gameplan.

We are witnessing Mexican royalty truly emerge from within boxing’s ranks, with advertisements, businesses and other entities now deeply tied to the Mexican fighter. He’s like a rockstar that can fight. This comes with a lot of apprehension from some envious ranks, some motivated by business interests, but also cultural differences between many of the sport participants wanting US/American stars whose birthline is not Mexican.

Canelo was also assailed by Demetrius Andrade, a middleweight titlist whose been clamoring for a fight with Canelo for years. Andrade crashed the press conference demanding a fight, but Canelo rebuffed the fighter after being irritated with the questioning.

The event was fairly comical. At times, Eddy Reynoso would even coach Canelo responses towards Andrade’s team.

Eddy Reynoso: “dile que lo vamos a sacar del hotel…”/ (tell him will get him out of the hotel”.

The Two Mexican heavyweights gave their most complete version of themselves, the good, the bad and the wild as Arreola chastised the judges for bonker scorecards.

Andy Ruiz Jr won Saturday’s May 1st showdown via Unanimous Decision. While this editor had Ruiz winning 8 rounds out of the 12, Arreola scored a knockdown in the 2nd. There was also very definitive work during the 3rd where Ruiz was stunned by the same straight right hand. Our score was 116-111 in the score cards for Ruiz, not the ridicolous 118 to 109 two judges had for Arreola. Even the scorecard we have does not tell the entire story. Cris was dangerous for 4 rounds, while also still having the potential to time Ruiz for the last 8 rounds.

Regardless of the official scorecards, the fanbase for both fighters would likely enjoy the PPV once more and numbers, social media have established an appetite for a rematch.

The second and third round saw evidence of Andy Ruiz Jr’s ring rust and oveconfidence. While coming forward, Ruiz was rocked and dropped by a straight right hand from Arreola during the second round of their fight. Again, in the 3rd round another right connected and appeared to hurt Ruiz. Timing was key as Ruiz went straight forward, missing and Arreola was able to capitalize off that mistake. His jab was consistent throughout the fight, most notably in the first half of the fight.

The new training camp. The weight loss, the new mentality may have led to an overconfident Ruiz. Arreola may be 40 years old, but his camp with legendary Joe Goosen proved that he could once more be inspired enough to drop any former champion or champion. Conditioning, technique and experience proved more valuable for the faster, possibly more powerful Andy Ruiz Jr.

Eventually, Ruiz Jr’s faster handspeed and three punch combinations consistently landed on Arreola who was grimacing from bodyshots and punches to his shoulder. Ruiz Jr. may have anticipated a cautious Arreola. As a result, he began targeting his defensive posture and may have hurt Arreola to the shoulder (of all places) by the 8th round.

As mentioned, the wide (too wide) margins led to Arreola to call foul. Belligerent and colorful, he advised that the judges should ‘Suck My D*ck‘ since the cards were so overwhelmingly in favor of Andy Ruiz Jr despite his early knockdown and control of the fight.

For his part, Eddy Reynoso commented on Andy Ruiz Jr having shown the newfound discipline. He remarked that Andy was able to define

The undercard also featured bonus fan fights, with members of the audience brawling at different points and time of the event. There are countless videos of the incident, no security present but also no serious injuries at the Dignity Health Park Stadium.