Focusing on the Mexican experience, Obama's first presidency is the harshest in recent memory. Obama is worse than Reagan; worse than Bush; worse than Bush II. Despite the fact that Clinton signed NAFTA against intense labor opposition and to the detriment of Mexican agriculture, Obama is still much worse. 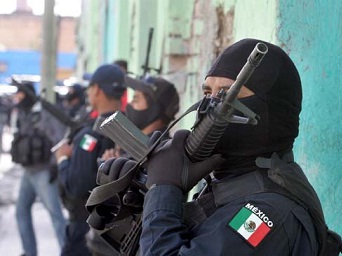 Drug cartel violence worsened due to overuse of the 'Kingpin Strategy' in a US bid to gain strategic leverage over the Mexican government through Plan Merida.

La Cartita -- Focusing on the Mexican experience, Obama's first presidency is the harshest in recent memory. Obama is worse than Reagan; worse than Bush; worse than Bush II. Despite the fact that Clinton signed NAFTA against intense labor opposition and to the detriment of Mexican agriculture, Obama is still much worse.

There is a huge difference between Obama and Clinton: the Obama administration's cultivation of a military client state. Under the Clinton administration, military cooperation between Mexico and the U.S. was extremely low. Operation:Gatekeeper was to keep Mexican migrants out and was a form of aggression against the Mexican public, but involved no military training for the Mexican military (these were not formally institutionalized yet). Under Obama, there are ongoing U.S. sponsored operations smuggling arms to Mexico (Operation:Gun Runner was only one instance of many ATF & DEA actions), official military aid under 'Plan Merida' and political for the Institutional Revolutionary Party (PRI).

During his first presidency, Obama deported over 1.4 million people. Most of them were Mexican. Central Americans have historically had horrible relations with the U.S. While they did not suffer the majority of these deportations, their dislocation was certainly the most devastating because of the geographical distance to the U.S.

Ironically, the number of deportations achieved is one of the few campaign promises Obama actually did keep. In 2009, the Obama administration estimated it would criminalize 1.4 million immigrants by 2013 through its Secure Communities program. This promise, then, ended just in time for an inaugural and state of the union address that made Obama appear benevolent towards all immigrants.

How exactly did Obama manage to surpass George W. Bush's number of deportations?

Obama achieved this by extending the Secure Communities program to every local jurisdiction in the country, requiring local police to fingerprint all suspects for verification of their immigration status with the FBI and Homeland Security. This information is then passed on to ICE who may request to extend an immigrants detention. The Obama administration's efforts regarding immigration law have only been focused on maintaining control over immigrants. Obama is so obsessed with maintaining federal control over immigration that his administration filed a lawsuit seeking to modify the SB1070 laws so that they not interfere or violate federal policy. Their concern was not that civil rights laws were violated, but that federal immigration laws were being ignored.

Why is immigration enforcement so selective and particular to Mexicans? After all, the federal government is constrained by Civil Rights era laws that do not allow for it to explicitly attack a population on the basis of race or national origin.

The answer lies in erasing the historical memory of Chicanos. Arizona's policies are so transparently racist that it almost does more harm than good towards the federal policy of enforcing artificial borders; the policies have mobilizedstronger resistance and alerted its principal victims: Mexicans.

In the wake of SB1070, there have been numerous demonstrations against not only the details of the law, but also against its general spirit. Many people have simply begun to articulate anti-settler colonist views, not less. However, perhaps, the White House's view is that the United States is becoming too Mexican. Therefore, depleting our numbers is a central part of erasing this, from their view, problematic identity.

SB 1070, E-Verify and Secure Communities complement each other. The latter simply concentrates enforcement on sectors that employ economic migrants from Mexico without naming them directly. The racism is implicit, but technically legal. On the other hand, SB 1070 is a throwback to Jim Crow laws. In other words, the federal government can already accomplish the same things Arizona Governor Jan Brewer is attempting to, but without violating federal law.

Both Republicans and Democrats seem to want to reverse the demographics of the U.S. Southwest. These policies deplete the political strength of a population that is not particularly aligned with either group. That is why harsh enforcement policies receive bilateral support.

Arizona is exceptional and differs slightly from federal immigration policy because it concentrates so narrowly on Mexican people. Federal policy is similar but forced to do so indirectly and haphazardly because it can not legally deport Mexicans in masse. This is what Border Patrol could do openly before the civil rights movement. A massive operation like 'Operation Wetback' is basically illegal because of the Civil Rights movement, but circumvented through immigration law and SB-1070 style legislation.

Obama has kept the Bush Jr. era police state that circumvents constitutional law through its monitoring and policing of immigrants throughout the U.S. Again, the principal victims are Mexican. Thus, we have the biggest incentive to organize around what is largely an economic issue; we have a right to work and live in a country that has historically belonged to us.

Unfortunately, Obama's PR has had some effect on undocumented youth desperate for solutions. Chicanos who are historically conscious, privileged and educated (to the extent that they are informed) ought to know better. Still, lackluster proposals for immigration reform, from the DREAM act to the various guest worker visa programs, benefit immigrants based on their relation to an employer or the military. In other words, it tethers our members to either historically racist employers or hostile institutions.

The Obama administration has no 'moral center'. What they have done through Deferred Action was selectively enforce existing federal law. Secure Communities and E-Verify intrusions still remain legal requirements for all law enforcement agencies! Deferred Action has done little other than exploit a demographic distinction between DREAMers and their parents. These actions give the illusion of 'change' where there has not been any, a trademark of this administration.

Let us suppose a real pathway to 'legalization' (again, which is not what Deferred Action is) were offered to every undocumented person under 30 and enrolled in school. What about everyone else? Nothing that has been proposed is satisfactory. Obama's lowball offer for a "pathway to legalization" co-opts DREAMers into accepting the immoral category of 'illegal' for anyone not qualified for Deferred Action or residency.

To the DREAMers credit, Deferred Action was a concession that was drawn from Obama after a series of intense acts of civil disobedience. More of these actions need to happen for substantive change. Bear in mind that Obama's promise to deport as many immigrants as possible has already been fulfilled. In a sense, the changes in immigration policy were destined to happen regardless of whether DREAMers organized or not. He has upheld his promises to all other constituencies, the business class, the white racists in the south, and so on. As always, Mexican and Chicano demands come last.

During his state of the union address, Obama said nothing of any relevance for the Mexican community. Nothing of NAFTA, nothing about repealing his 'drug-war' counter-insurgency in Mexico, and nothing about removing the federal intrusions into our communities. Chicano discussion about actions should therefore proceed without these two parties and their points of view. There has already been far too much compromise simply waiting for federal action.