Ricardo Lezama --- During the latter half of 2015, various public exchanges of ideas and criticism took place regarding the proper depiction of the Mexican community in the mainstream media. These discussions were essentially reactions to some key events involving prominent "Latino" media personalities.

Already, the focus on self-identified "Latinos" seemed misplaced. We, as Mexicans, should be focused on internal needs. Irrespective of what side of the border we reside in, only Mexicans can properly address things like media representation, the drug war, our need for comprehensive immigration reform, labor rights in agriculture, the unique Mexican heritage, cultural identity, and so on.

Understandably, for those with a less principled view of Mexican identity, there was great disapproval for the news that Lalo Alcaraz announcement of his new role with the Disney corporation, but I was not really surprised - worse things happen in the Mexican community. For one, I believe that anyone who brands themselves 'Latino' is already ideologically compromised. Abandoning ethnic and national identity tends to veer people into the superficially varied path of American assimilationism. Thus, it made sense when Alcaraz defended why he would begin to work as a 'consultant' for the Disney corporation film he drew a cartoon 'against'.

You see, someone like Alcaraz never was against the permanent rebranding of Mexican culture - he just wanted a piece of the action. He even said so. Online, Alcaraz mentioned that he wanted to make sure Disney 'got it right', but the obvious questions is "why does Disney have to anything of ours at all?". Keep Star Wars. La Catrina is Mexican forever.

Some thought that because 'Lalo' had helped boycott 'Coco', a film that steals Mexican imagery resembling sacred Day of The Dead celebrations, he was actually down. But, Lalo, to further insult those people who had validated his calls boycotting 'Coco', also began promoting a project with the media conglomerate "21st Century Fox" called 'Bordertown'. The cartoon has been critically panned by the Mexican community due to its oversimplification of current and past history, relations between white institutions and Mexican people ... and just plain bad Family Guy plotlines. Even white people criticized it. The rapid succession of the announcements and work led to vehement opposition to both projects, and calls for the boycotting of Bordertown, with people using #BoycottBordertown quite successfully.

Despite his best efforts, Mexicans online were not buying Alcaraz' excuse for both shitting on Disney's project, then working for them AND Fox. In fact, the clamor over Alcaraz' participation in 'Coco' and 'Bordertown' projects was noticed by non-US media too. The facts of the matter were presented well by the Spanish newspaper,El Pais. On creative control, El Pais writer, Felipe Sanchez, referenced Unkrich's ethnic origin - obviously, not Mexican. For this reason, Unkrich has been quite adamant about his 'acquired' expertise. Sanchez writes:

Acquiring legitimacy from Alcaraz, and the latter's willingness to be used this way, is quite in line with Unkrich's goal that the project 'Coco' be perceived as legitimate by the Mexican community - Hollywood is all about perception.

Sanchez also noted why Alcaraz announcement was so polemical to those who remembered Disney's attempt to copywrite Mexican culture:

Surprisingly, no mainstream outlet in the United States covered focused on who will actually produce 'COCO', which is why people were pist in the first place. MSNBC referenced the overall debate, favoring the assimilationist view that such incorporation of Mexican art was an 'ok' thing, diverting the discussion into the usual 'Democrat Latino' framework and omitting any other perspectives. Mexican opinion of the sort that questions Lalo's interpretation of 'success' is problematic for such discourse. Its an open rejection of willful assimilation, especially, assimilation of the type that condones collaboration with projects that turn corporations into producers of Mexican culture. To put it in perspective, this sentiment and principled thought is what motivated the various protests against Isabel Marantz' usage of Oaxacan art.

Mexicans decrying Lalo's 'perceived' (I say perceived because he really wasnt down to begin with) betrayal inherently question the legitimacy of a "midwestern Jew's" (as Unkrich was described by Sanchez, a Spaniard) right to create a Día De Los Muertos Film. There is just something inauthentic about Disney's effort that someone in Lalo's position has to ignore, but everyone else whose smart enough can perceive.

The facts, as sketched out by Sanchez, make one reject Lalo's idea that tempering mainstream depiction of Mexican culture is better than simply ignoring them. Out of fairness, we share Alcaraz' rhetorical question from Twitter: "These movies are being made with or without our input,"[...] "I believe it's better to have input, don't you?. We certainly dont since they provide a false veneer of legitimacy to projects that should have never existed in the first place. We believe it best to ignore such projects and not confuse the issue, but that position doesn't necessarily pay a struggling artists' bills.

What can be said about the OC Weekly's Gustavo Arellano? Many things, like the fact that his claim to fame("Ask A Mexican") was the idea of his white editor, that the tasteless logo for 'Ask a Mexican' was also made by a white guy, that his crime reporter is - you guessed it - another white guy, who always speaks ill of Mexican defendants (including some acquaintances). However, most exchanges with Arellano, Arellano himself and his work, can be boiled down to one adjective: petty.

For instance, when questioning the nature of Ask A Mexican, worldview promoted by the OC Weekly and validity of Bordertown, Gustavo Arellano just could not take the criticism. He got defensive and real personal. Most twitter exchanges with him involve ad hominem attacks, and petty behavior. Check out the image below: 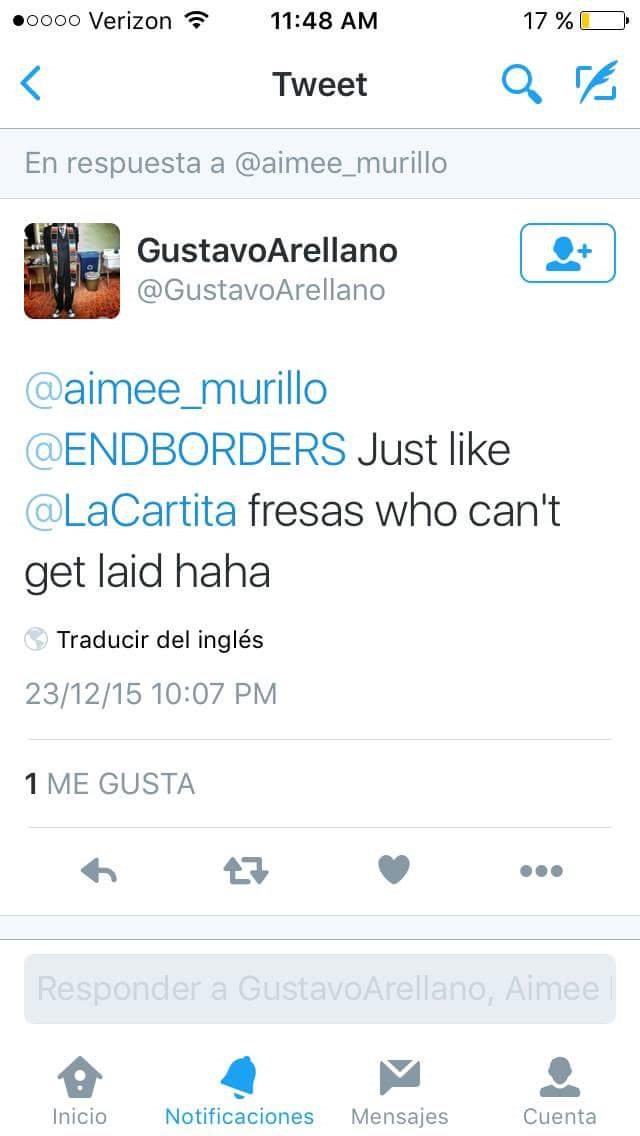 Why waste time on him if I dislike his work so much? *** Well, Arellano has a major platform online that unfortunately influences younger generations. If people who do not necessarily have the "cheeky" humor he presumably tries to convey, then they may interpret these racist cliches as valid. Arellano has piggybacked on legitimate community spaces and activities too. During the Anaheim shooting, Arellano made an appearance decrying the police abuse, but also declaring those who threw rocks at the squad cars "knuckleheads" and applauding the subsequent police response.

*** Additionally, the sudden interest in the 'Ask A Mexican' column was sparked off by the major protests that were launched by organizers in Mexican cities like Santa Ana, my hometown. Ideologically, people like him stifle the militancy and growth of our community, driving home the point that Arellano confuses people about identity and politics, while simulatenously validating white racist views that would otherwise remain marginalized. IIII. The Centers of White Media Attention

People who make themselves self-appointed representatives of our community do a disservice when they choose to present our culture as anything less than dignified. Identifying yourself as Mexican, in a manner that is true to the culture, really does enlighten organizing efforts. Recall that one of the reasons the Ayotzinapa case became a central topic internationally was because people who identified as Mexican finally took the reigns despite not being present in Mexico. This organizing wouldn't be possible if everyone thought like Alcaraz and Arellano. We must defend our culture vigorously if we think we can truly advance our varied causes as Mexicans. 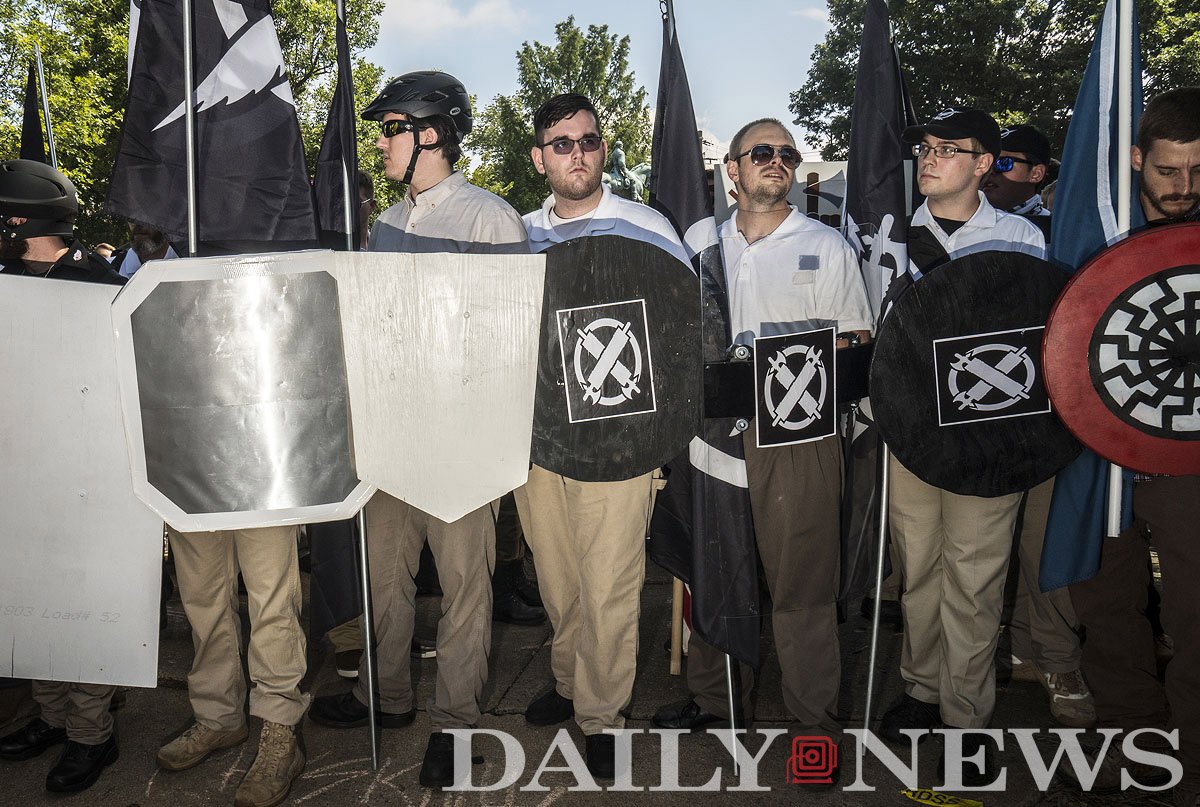 Guerrero: Explore One of Mexico's Centers for Political Conflict