Rallies were held in New York at the Homeland Security office. Throughout the US, immigrants withdrew from work and school activities. A May Day work stoppage is upcoming too.

Proud - but hungry - Mexicans observe #DayWithoutImmigrants in Brooklyn/Nj/Ny area as they strike out against white supremacy. pic.lacartita.com/gaxLUP6jYr

Gabriela Ivonne Ortiz --- Mass protests have erupted in major cities across the US. Immigrants and their supporters have declared "a day without immigrants" in response to Trumps anti-immigration, xenophobic, islamophobic proposed legislation. Restaurants in DC and Brooklyn have closed down for the day in a show of solidarity. 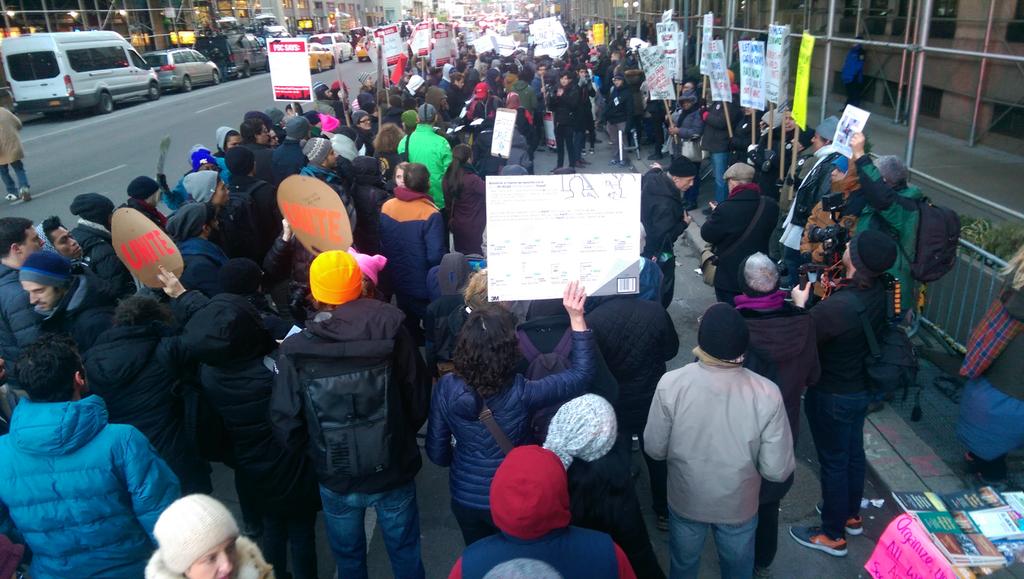 The call to boycott from work, shopping, and school circulated around social media days before the protest. As usual, massive protest were seen in big cities like Chicago, New York (where Whats App threads spread idea of a work stoppage), and Los Angeles. But what about the small towns around the US?

Communities Rally Outside of Big Cities

One small-town school district located in the central coast of California, Santa Maria, saw just above 50% student attendance, in comparison to a 98.2% attendance two days earlier on Valentine's Day. As a native of the city of Santa Maria, I am familiar with the demographics of the city. Like most cities, Santa Maria is divided along racial and economic lines. There were three elementary schools with the lowest attendance of the district: Bonita 36.88% attendance, Fairlawn 39.33%, and Adam 40.70%. It should be noted that these three schools are located in a neighborhood with a lower socioeconomic status. The top two schools with the highest attendance were Taylor 77.32% and Tunnell with 76.50. These two schools are located in "nicer" neighborhoods with a lower number of immigrants residents. These numbers only reflect the K-8 schools, of which there are 20.

School officials made announcements prior to Thursdays boycott, highlighting the importance of attending class. School faculty assured the students that they had a safe and fun place. But the faculty did not anticipate this degree of absences.

Working class parents in Santa Maria decided to keep their children from school for the day to express their rejection of Trumps hateful policies. 70% percent of Santa Maria are labeled "Latino/Hispanic". Trumps policies personally target immigrant working class families. Most are likely Mexican too.

Just last week, a series of immigration raids saw the detention of almost 680 people, including one student protected under DACA. Four of the 680 individuals detained were from Santa Maria.

Indeed, immigrants are an integral part of my community in Santa Maria, but even more so of the US. Immigrants are more than just the labor behind our favorite produce. They are more than the bodies occupying a classroom. It is imperative that we continue to stand with each other.