La Cartita --- Antonio Tizapa, father of a disappeared student, claims the DEA may have more information regarding location of his disappeared son and classmates. The high profile case of 43 disappeared Ayotzinapa students from rural Guerrero, Mexico, has attracted not only the attention of international human rights organizations, but also of US law enforcement due to a link between the disappearance and a Chicago/Guerrero based Mexican trafficking organization. [[See More]] La Cartita --- At 42 months since the disappearance of 43 Ayotzinapa students, Mexicans protested in front of the notoriously corrupt Mexican consulate in New York City yesterday, March 26, 2018. These Mexicans demanded the return of 43 disappeared Ayotzinapa teacher's college students, an iconic rural college located in Tixtla, Guerrero, Mexico. On September 26, 2014, the students were kidnapped by security forces in Iguala, Guerrero, many of whom were provisioned US and German weapons.

Unfortunately, Antonio Tizapa is forever a referent for how to conduct a succesful non-violent resistance campaign towards Mexican and US government repression. He may not think so, but that's just his nature. Tizapa, a plumber by occupation and running hobbyiest, has racked up marathon medals and press articles all for the end of finding his son, Jorge Antonio Tizapa Legideño.

Though Jorge has been kidnapped by the Mexican state and remained missing for nearly 3 years, Mr.Tizapa's efforts have only grown in sophistication and political significance. At every turn, Tizapa is forcing the Mexican government to alter its propaganda campaign.

If Tizapa runs in a marathon, Notimex, the official state press agency of the Mexican government, will begin to increase its coverage on runners and athletic events. If a local New York collective begins to make noise about Mexico's Human Rights crisis, then most certainly the Mexican government will make token gestures towards immigration relief instead of addressing economic inequality at home.

In fact, the Mexican government doesn't even show up anymore. This year, unlike most, Enrique Peña Nieto will not be making an appearance at the UN General Assembly. We believe its the negative publicity generated from local protests against his presence. However, his chief emissary is (unofficially) now Miguel Ángel Mancera, the mayor of Mexico City, alongside Luis Videgaray who is formally the Secretary of Foreign Relations for the Government of Mexico.

Mancera has repaired somewhat the standing of the Mexican government in the UN Forum of Indigenous Issues this year. Now, he will present himself at the Climate Change related talks during this year's assembly.

Almost in sync with Tizapa's US based protests, marathon runs and public statements, Mexican consulates throughout the country are forced to issue out more cultural grants in New York or DACA relief in Los Angeles while making press releases pertaining to whichever newest atrocity afflicts the country in a tone and demeanor that deflect responsibility. The Mexican government is performing continuous damage control.

The US Government & Public Reaction to Ayotzinapa

Under the Obama administration, the State Department and DEA were coy about what they said about Mexico. They were measured on what conveyed regarding the topic of Ayotzinapa publicly. Supposdely, They do not have the same legal and political obligation to Tizapa and his supporters. Even so, virtually every human being who hears Tizapa's story is moved to a real empathetic reaction. The marches, Running 4 Ayotzinapa campaign and the press outreach has continued to define the narrative surrounding the Ayotzinapa case in the United States - New York, no less. There have also been various contacts with officials in US Congress.

A fact not lost on US policy makers is that their public is continously exposed to evidence of tax malfeasence. Most of the politically active population in the NAFTA afflicted Mexican forced migration now teach others about Plan Merida too. The Merida Initiative is a US government programme started by George Bush Jr. - modified and administered mostly by Hillary Clinton, though - to supply Mexico's corrupt government with arms and training to deal with the "drug war" problem. Policy planners, which include both Clintons, know that supply side interdiction adds fuel to the fire. Most of the US public does as well. 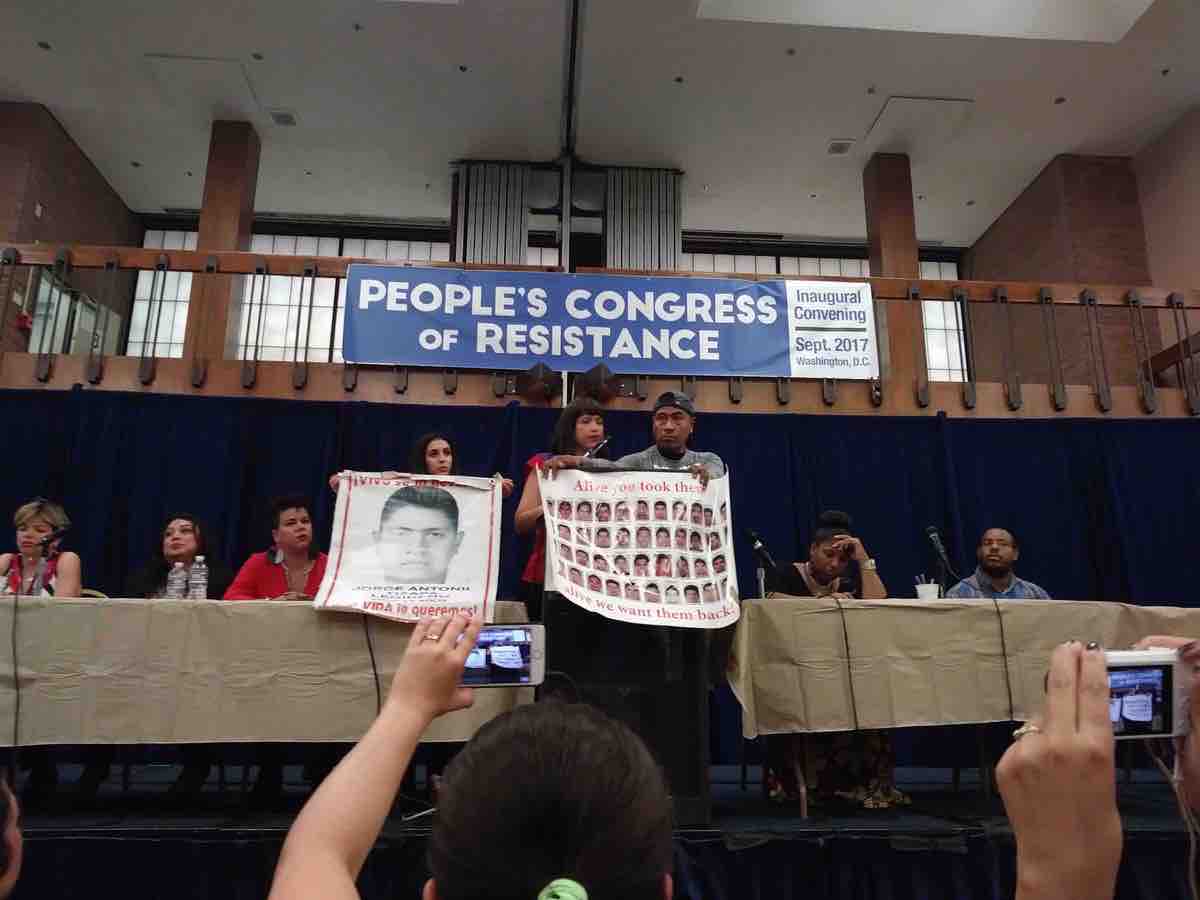 For this reason, when Antonio Tizapa denounced the Merida Initiative and claimed his son would not have been abducted had the police not been so empowered through the weapons supply, most audiences no longer. They applauded in collective anger and approval at his statement.

The US' official position was to repeat the same reasoning presented by the Mexican Attorney General's office. However, what concern was expressed publicly differed from what they knew already. Along with confidential informants throughout the Beltran Leyva Organization (BLO), the US Embassy in Acapulco and Mexico City also has access to influential figures in Mexico. Its impossible for them to not know their funds were connected to the human rights abuse.

The equipment used in the Mexican military is sourced from the US; arms, training and personnel make their way into Mexico via Plan Merida. Money is not directly exchanged between the Mexican government and the United States or vice. Instead, a credit is assigned to the items and US taxpayers finance the transfer of equipment, while Mexican taxpayers also pay a heftier bill for its long term maintanence. They also suffer the much more real cost of being at the wrong end of those weapons. The training for police is often overseen by US military advisors. They often times also develop contacts with Mexican troops and can siphon intelligence to the US via these contacts.

The Organization of American States (OAS) sent a group of lawyers and civil rights activists to Iguala, Guerrero and Mexico City. They were called the Interdisciplenary Group of Investigators and Experts (GIEI). The group managed to uncover new lines of inquiry, but not before people connected to the case disappeared or were outright murdered.

As outrage grew due to activism in the US and Mexico in early 2015, press reports conveyed the concerns of the US public, raising pressure on the US government and planting doubts about the viability and morality of their plans in the region. Historically, concern in Mexico over the US' role in the region has not been enough to reverse their course. What changed since the crime in September 26, 2014, is that the US public added their voice to the chorus thanks to the efforts of all the Ayotzinapa parents.

In the aftermath of the Ayotzinapa related activism, 4 Human Rights organizations are now petitioning Rex Tillerson to withdraw aid from the Merida Initiative. On paper, the request could be ignored. However, the organizations reflect the outrage generated by the Ayotzinapa parents struggle. In New York and DC, where these organizations live, Tizapa has generated the headlines to create a constant evaluation of their stated mission.

Whether the State Department cancels Merida Initiative aid, Tizapa, Don Mario, Doña Hilda & the parents have already won something for the community: dignity. That dignity and its visibility is intimidating the corrupt Mexican officials in the US payroll financed by Plan Merida's equipment financing. I am certain the 15 percent that hangs in the balance based on Human Rights compliance by the Government of Mexico will be withdrawn, eventually, because it makes for a good press release and creates confusion as to whether Trump is anti-Mexican (he is). Regardless, the struggle to find the students is pending.

The Mexican Dream, Our Collective Nightmare & The Need For The Truth

Tizapa has spoken of a 'Mexican Dream'. Where Mexicans are emancipated from the current US dominated economic reality. Withdrawing the funds provided to the Mexican government via the Merida Initiative would be just one of many steps needed to accomplish this 'Mexican Dream'. The most important step for Tizapa remains recovering his son. Life is meaningless without family. Since we are one big Mexican family, our lifes are left bleak without the 43 too. And so, until they are found, the rest of this family moves towards this dream.

As things stand currently, we're stuck in a nightmare, in the parents nightmare of not knowing where their children lay at night. A trance where hunger, pain and joy are measured by the speculation that surrounds the 43's whereabouts. They feel suicidal, but they live on to make sure the government pays what they owe. And, they're not alone. Thus, whether now or later, Mexicans will settle this debt with Mexico's dictatorship. 3 years on and every second that tallies accrues interest against them. Time is not on the dictatorship's side.

VIDEO:"If you can find El Chapo, then you can find the Ayotzinapa 43": Inter-American Court of Human Rights member
Video:La Cartita

Documentary Screening of Ayotzinapa Dad To Screen in Paris

A film documentary on the story of Antonio Tizapa's struggle to find his kidnapped son will be screened in Paris.

In Mexico City, Ruiz held a brief exchange with the president of Mexico, Enrique Peña Nieto.

On September 26, 2014, 43 Ayotzinapa students were forcibly disappeared by municipal police in Iguala, Guerrero.