La Cartita --- The Trump clan is itself more an enemy to the U.S. public than Mexico, a neighbor waiting for the disastrous American led drug war to end. Tweet 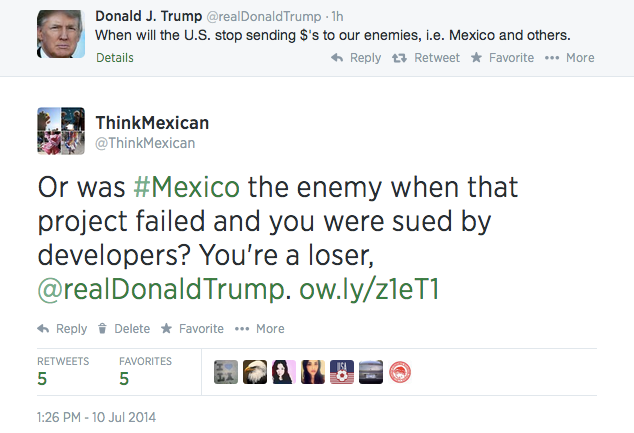 La Cartita, July 10, 2014 --- On what moral grounds can Trump possibly make the accusation that Mexico is an enemy of people in the United States? As the photo clearly shows, Trump's personal ambitions may have more to do with his resentment. No one should care too much that his business deals did not pan out, but we ask 'why does Trump feel the need to lash out on Mexico?'

The Trump clan is itself more an enemy to the U.S. public than Mexico, a neighbor waiting for the disastrous American led drug war to end.

Just today, the New York Post, published credible allegations that Donald Trump's son-in-law, Jared Kushner, has been forcing residents out of an East Village, NY, NY building he owns in order to coerce higher rents out of new residents. Current tenants report feeling "intimidated". Among them is an "87-year-old man" who "is being sued because he's allegedly created a dangerous hoarding condition".

The Trump family apparently knows no limits to the shady associations and business moves it is willing to make in the U.S. or abroad. According to the Haaretz, Kushner's investment group has also agreed to buy control of Phoenix Holdings, an Israeli insurance and financial services company, which recently admitted that "the compensation it is paying CEO Eyal Lapidot failed to meet the new criteria set by Dorit Salinger, the treasury's supervisor of capital markets, insurance and savings [in Israel]"Lapidot's future compensation was not linked to the performance of the company's financial portfolio, as is required under new directives."

What that means is that Phoenix's CEO could sink the company without suffering the same consequences as his investors or employees.

Finally, Donald Trump himself was the target of a fraud lawsuit by the New York Attorney General. They alleged that Trump oversaw a phony "Trump University" that made grandiose promises of wealth for its students, but "instead steered them into expensive and mostly useless seminars, and even failed to deliver promised apprenticeships" (Associated Press, August 25, 2013).

According to the Associated Press: "many of the wannabe moguls were unable to land even one real estate deal and were left far worse off than before the lessons, facing thousands of dollars in debt for the seminar program once billed as a top quality university with Trump's "hand-picked" instructors."

There is more than enough evidence - all of which has emerged within the span of less than a single year - to conclude that Trump is in no moral position to hurl accusations at an entire country.

B and H Abuses Mexican Labor

B and H continues to engage in anti-labor laws. Now they are headed into a lawsuit citing workplace discrimination against primarily Mexican workers in Brooklyn.