La Cartita --- For the past three years, Brownside has released a steady output of very popular music online and in CD format. Independent, without even the support of alternative digital outlets, like Vlad TV or DJ Akademiks, the group's following has grown more massive. This suggests that over time it was not only the older brown brothers & sisters in the colonized southwest that spread the word on Brownside's music, but also the younginz siblings, kids and friends. In other words, when Brownside speaks, the barrios listen.

Very few people can express a point as succintly as Toker from Brownside. Some people who dont even like Hip-Hop will play his music at protests just to prove the point. Thus, 'Fuck Donald Trump' remains an underrated classic in protest music, made shortly after Trump made his 'Mexicans are rapists' comment.

A situation is always better described by a connected participant. We have to accept that there is far too high a cost to being misinformed, particularly, now as 'Fake News' charges are levied at any piece of information that is not favorable to a conservative opinion.

In Hip-Hop, the fact that drug-trafficking is glamorized by individuals not remotely connected to that world is troublesome. It means the 'fake' guide the naive.

For whatever reason, people like to hear 'action-themed' music, read sensationalist news, but these exxagerations obscure the reality around the subject of the drug war. Regardless of how inaccurate a portrayal, people will flock to drug-themed lyrics because they seem more legitimate than straight-laced music. Where does this leave actual gangsters? Probably in a position to guide the conversation regarding Mexico's drug war with an injection of reality. Toker, a member of Eastside 13 in South Central Los Angeles, fits the bill.

""...Gangsters trying to be rappers..."
-Toker from Brownside

In this way, 'El Más Buscado', a ferocious, introspective description of a top drug capo's psyche is a welcomed breath of fresh air for Hip-Hop drug themed lyrics. This is a detour from bullshit. The song is a testament of who Toker is, like him or not. Toker's truth in those lyrics presents the reality drug-war, for the first time, from the south to the north. The reptilian calculus that governments and traffickers equally engage in is laid bare. What does Tokes' say, then? Check it out:

The song opens with a first volley of threats over a bounty placed on a king-pin:

The issue that unravels quickly is that this top-down pressure has led to so much violence in Mexico. And, it does not work. We already know what happens when you pressure an individual with that much to lose. The song continues:

The question, then, 'what does the US actually want to happen' in a country that is implementing their rules? Does the US even care that the Kingpin Strategy, imposes chaos, violence and disorder for the people with the least to do with their goals? Intentional or not, Toker shows you exactly how that set of individuals thinks, and, why they are only one piece of the violent puzzle that constitutes the US-Mexico drug war.

Most analysts criticize the US' expeditions into drug producing countries as wasteful, destructive and not as efficient as just treating addiction. Toker shows us how an individual defending themselves from that obsessive king-pin bounty escalates the situation.

Origins Of Brownside, Social Context and Los Ángeles in the 1990's.

During the 1990's, tensions between ethnic groups in South Central Los Angeles were always high, but not for the usual reasons. Blacks and Mexicans often were in conflict due to the business imperatives of gang organizations. This tension would spill over into the streets. While it is easy to communicate the negative effects some of these organizations had on the general public, less commented by news media is the manner in which they instilled discipline and restraint on younger membership to contain rampant violence during the 1990's.

In this way, Hip-Hop music has been a unifying force in a world that is far too managed and influence by white supremacy. For a moment that was too brief, groups like Brownside represented Mexican identity in a platform that received global visibility. And, they did it correctly, insisting that the Mexican flag be placed on all their products.

""The release of bilingual albums likely sparked the mainstream acceptance of Spanish language content in hip-hop and other derivatives of that musical format. ""

Toker has mentioned in online posts that he questioned Eazy-E's 'You Mexicans always coming in with that' comment on NWA's 'Dope Man' song. The insult was said in jest, but with people like Toker addressing the issue directly in a meeting long ago, the issue became 'water under the bridge'.

Eazy-E and Toker, representatives of Black and Mexican young men of their day, progressed to a friendship that resulted in a series of innovative albums and extended hip-hop culture.

The 1990's saw Brownside's well publicized release of albums featuring heavy Code Switching albums sparked the mainstream acceptance of Spanish language content in hip-hop and other derivatives of that musical format. Brownside likely created a market for Spanish influenced music nationally by breaking it regionally, in Los Angeles. Greed (and a little bit of condescension towards Mexicans) in the music industry probably leads to these type of accolades not being bestowed upon them. Say what you want about the homies, but most gangsters in Calfornia are Spanish-English bilingual, certified code-switchers and possess twice the mental vocabulary of the news writers and law enforcement authorities so quick to denounce them.

Brownside's musical style and samples consist of funk, soul and the lyrical cadence, likely attributed to the very distinct Chicano accent, made for a series of mainstream and later underground hits. 'Cant Stop The Southland', 'Vatos In The Varrio' and the menacing 'Payback' were all notable hits in the 1990's. In fact, 'Vatos in The Barrio' is among the first prominent examples of the Chicano dialect of English, code-switching and giving the first major exposure of 'Spanglish' to the hip-hop world.

Brownside is a rap group consisting of Wicked, Toker & Danger (RIP). Wicked, like Toker, raps in Spanish with one of his best verses (in our view) being in 'Sueños y Ilusiones'. Toker is narrative focused, employing an almost conversational style to his rhyming, but very quickly able to increase the tempo. He will frequently use idiomatic expressions as his punchline and rhyme.

The two styles contrast heavily in 'Sueños', Wicked will deploy three or four syllable words rhyming the final morpheme of a word in every other stanza. Rapping in both Spanish and English, Wicked 'waits' to rhyme, with the phrases containing not only bigger words, but longer stanzas.


Bilingual song off 'Sueños y Ilusiones' off of '13 Razones' album. 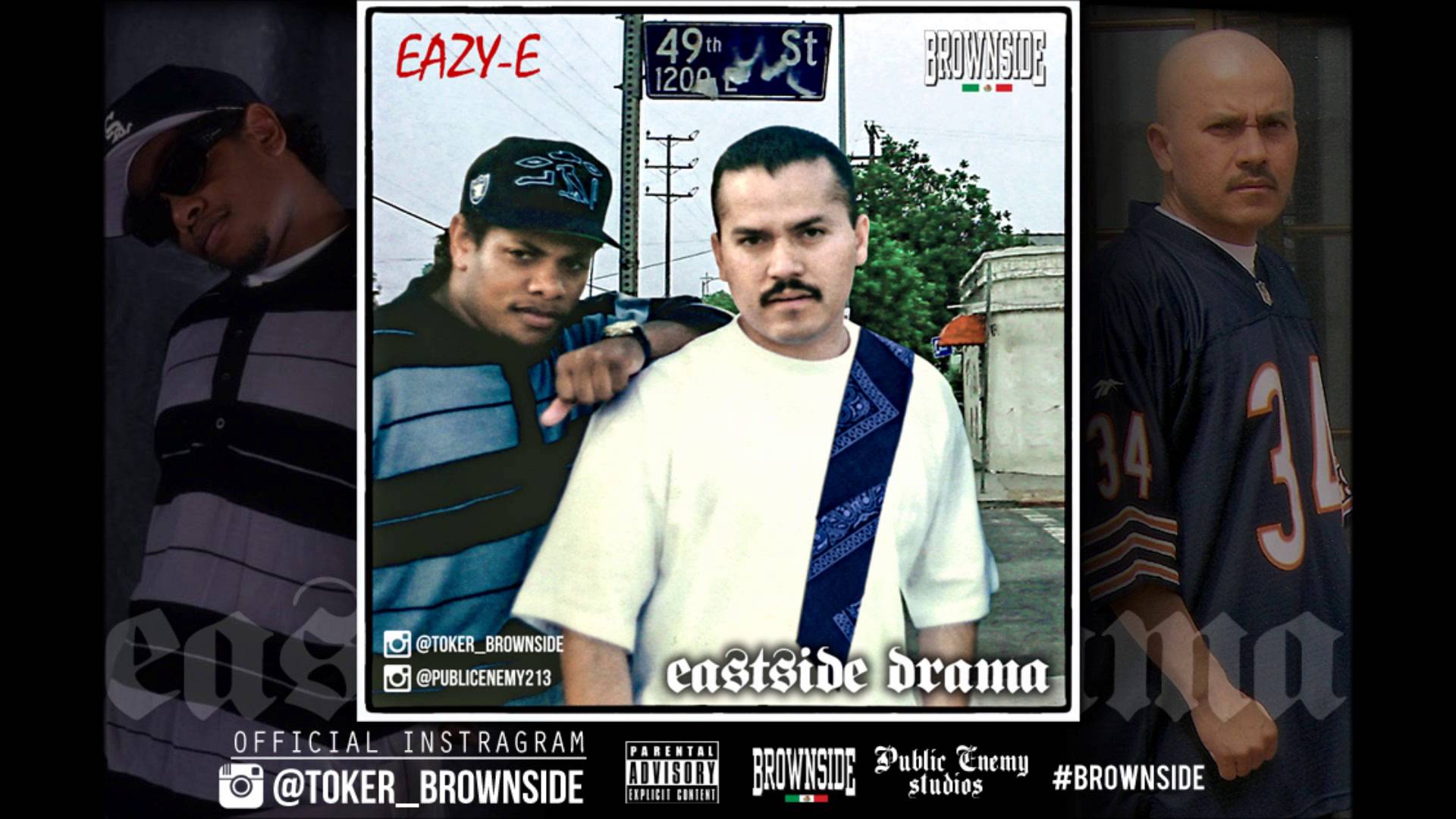 Flashforward to today and the music is still on point. The latest release from 2017, 'Bangin Storiez' has a solid mix of old-school and contemporary styles. Arguably, the most popular song in the album is 'Till The Casket Drops', an bass-synth track that packs a bunch of street tension into 3 and a half minutes of music.

The music video opens up to a scenario relevant to southern California. For anyone who thinks that gangsterism as a modality for business has gone out of style, the video proves that its still one of the ways to get things get done in this world. Makes you wonder if that is how Trump got 'got' in TJ with his condos. :)

Without mainstream radio support, Brownside's video raked in millions of views. Concerts, merchandise and the music itself is placing them on the map, while alternative outlets scoff at their real gangster brand of lyrics.

Besides their most popular track, another notable Highlight is the above mentioned 'El Más Buscado', a track that reviews the character arch of today's cartel leaders, who are all Mexican and all are defying the US government. Without glamour, the song reviews the mentality of some individuals who are better left unmentioned, but is definitely the array of choices such a person makes.

Everything is positive. Toker got a second chance at life, beating a 'cadena perpetua' sentence from the state of California. A corrupt cop, circumstancial evidence and sticking to the script let that big homie get his. Congratulations to him! Respect.

Deported Mexicans are in danger of being recruited into trafficking organizations.